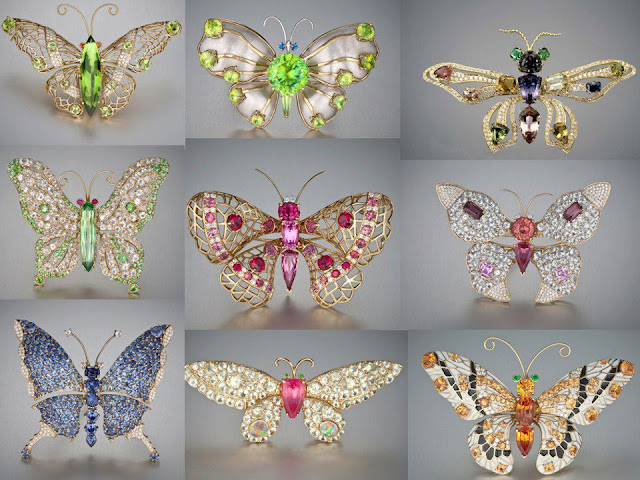 Isn't this gorgeous?  If you are near Los Angeles, the Natural History Museum is showing this exhibit through May 2013.  Makes me want to go visit.

If you are an artist, glass person or a jewelry designer, do any of these inspire you?  Which ones?  And what would you like to do with this inspiration?  I'd love to hear about it.
Posted by marcy at 8:14 AM No comments: Links to this post

Jewelry Making Daily has a bunch of free e-booklets that can be yours for the downloading.  Tammy Jones has mentioned them before, but I just finally took time to peek and know that I want to read each one.  (especially the enameling one first)

You can find them here.

Let me know which are your favorites, so I can be sure to read them.
Posted by marcy at 8:30 AM No comments: Links to this post

A Head Above The Rest 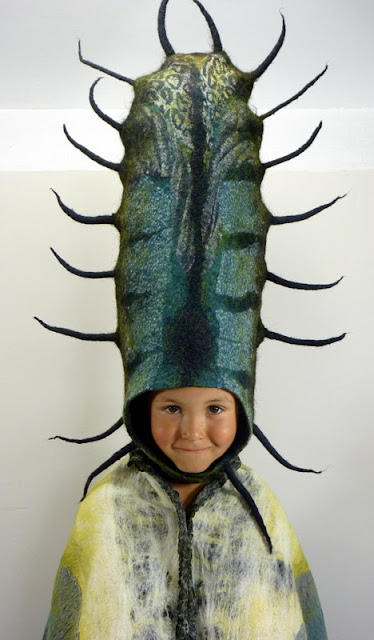 This is so my sense of humor.  What a wonderfully quirky costume for a lucky kid who is going through changes. (just  kidding about the last part.)  But honestly, I love this and that darling face smiling just makes it perfect.

Now if my kids would ever get married and have kids who loved bugs, I could possibly be a buyer.
Although I am thinking that having a hat like that would be an awesome vertical bead display at shows.  It really is delightful.

If you are lucky to have grandkids or children this size, you can find it here on Etsy.

Posted by marcy at 8:00 AM No comments: Links to this post 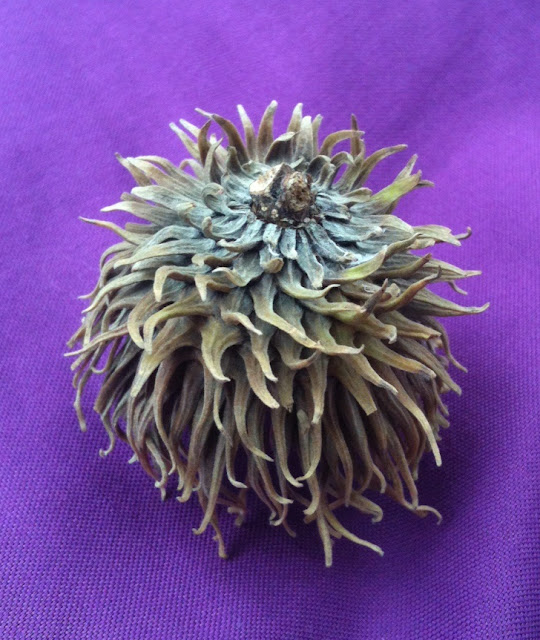 The other day, I was asking what this pod is, and one very bright reader told me that it is a Burr Oak.  It sure looked a lot like a prickly little pod that we used to have in our yard, monkey balls or something like that,  but it is a Burr Oak.  You can see some really cool photos on photographer Bill Pusztai's website, here.
Posted by marcy at 8:30 AM No comments: Links to this post 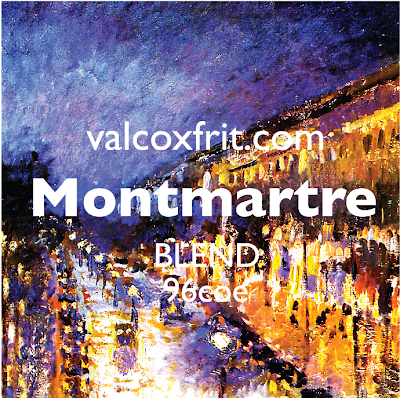 Have you seen the new Painter's Series by Val Cox Frit?  There are some really yummy new ones and you can see them all here.

Royal Ballet appears to look good on just about every glass background color- or at least all shown.  I'm always looking for pretty pink blends for my spring beads.

And I love seeing what's new in the neutral shades as well.  Sometimes I use them for fur and texture on my sculptural beads.

Tell me how you like to use frits and what you think about the new series.

Summer Is Not Over Yet! 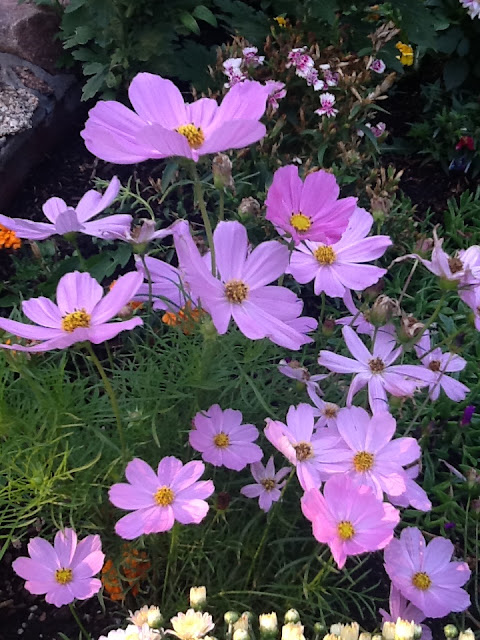 My Mom's flowers were looking pretty in the early morning sunlight, so I snapped a quick photo.  Summer isn't over quite yet.  As much as I love autumn, there's something about these gorgeous colors coupled with the fragile petals and textures, that makes me hope this season lasts a bit longer.
Posted by marcy at 8:12 AM No comments: Links to this post 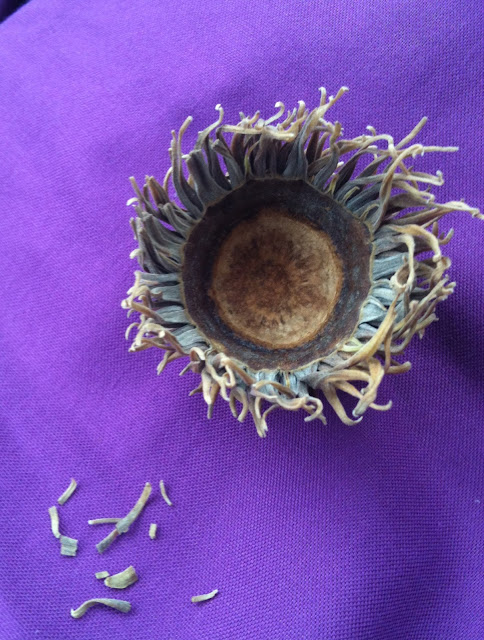 I saw this tiny half a pod about a month ago and picked it up. I am not sure what tree bears it, but it sure looks cute.

Here is the flip side.  If you know what it is, please let me know. 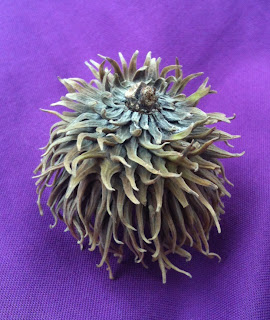 But I grabbed a few, just in case, it would work as a funny hat for one of my beads.  I have been doing a series on humorous witch doctors, and thought this might add to sense of fun.

If you know what southern tree this grows on, please let me know!  Thanks.
Posted by marcy at 8:52 AM 2 comments: Links to this post 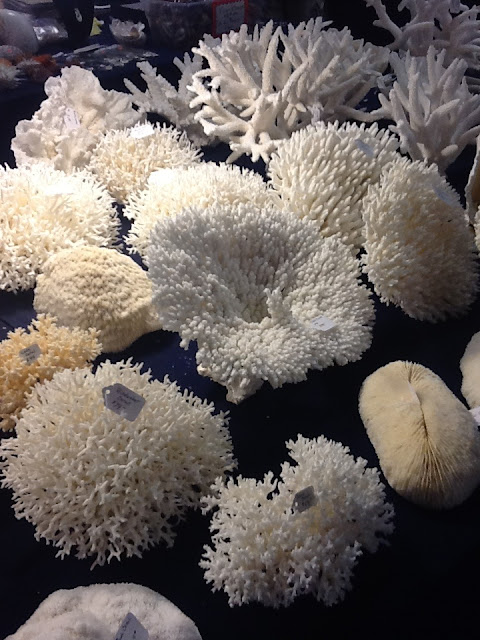 I know, this coral isn't coral, it's all shades of off white and cream colors.  But I love looking at the texture of coral.  Recently, I was at a show which had a wonderful variety of it.  I have been making glass coral for quite a few years and always love to see the real stuff up close and personal.

I am just not sure what one does with these beautiful samples.  As pretty as it would be as a decoration, I am at the point of trying to get rid of a few of my years' accumulations, instead of adding to it.

If you have ideas of a good use for it, please let me know.  Otherwise, I will continue to admire from afar.
Posted by marcy at 8:17 AM No comments: Links to this post 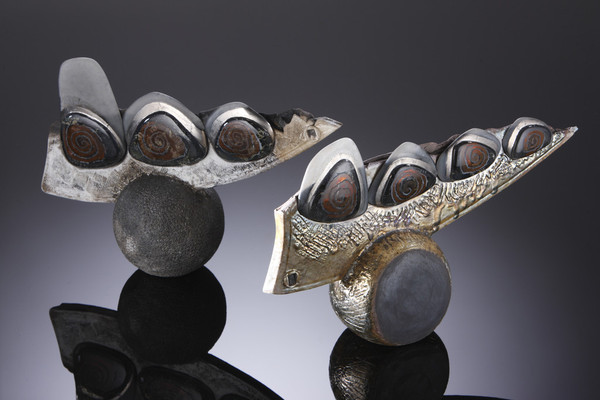 Glass artist, George F. Jackson's Abstract Forms with Fused Glass  really caught my attention.  I love the shape, texture and yes, the color palette that makes me want to reach out and touch it.

If you want to see more interesting glass artists featured, visit contemporary glass gallery, Bruntnell Astley.
Posted by marcy at 7:28 AM 1 comment: Links to this post 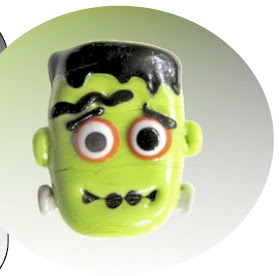 If you are a flameworking beadmaker, and haven't subscribed yet to Diane Woodall's Soda Lime Times, you are missing a great deal.

This month has the Halloween issue and I have a tutorial for Frankie, (pictured above) in it.  But within the 52 pages, (yes, that much!)  there is tons of content in her monthly subscribtion e-zine.  It is so worthwhile.  I have been beadmaking for about 12 years, and each issue teaches me something new.

Posted by marcy at 9:14 AM 2 comments: Links to this post

I was amused by seeing stacks of beanie babies at a converted superstore. It reminded me of a pickers' tv show, with a western flair. Tomorrow, I will show you some interesting photos. (I didn't know so many spurs were available!) 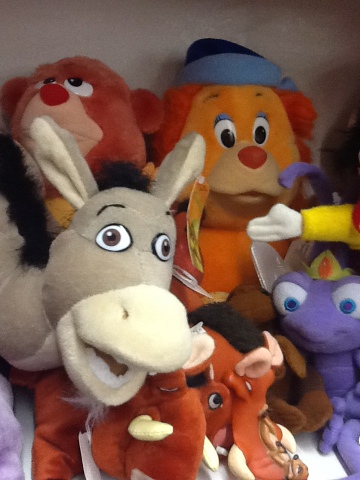 Posted by marcy at 3:52 PM No comments: Links to this post

I love the details in wallpaper from long ago. The sweet birds tucked in the foliage, makes me want to hunt for more. 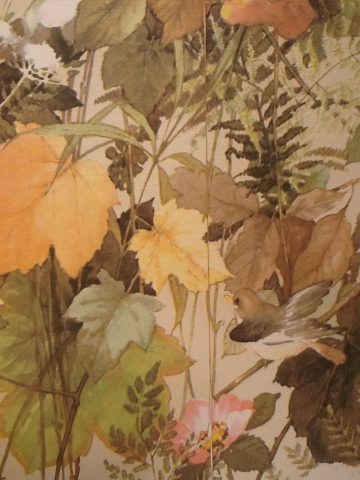 Posted by marcy at 8:45 AM No comments: Links to this post

To Infinity and Beyond...

That might be a bit of an overstatement. I am headed out to see friends and family for a few days, so my blog posts may be a bit sporadic. Will catch you soon!
Posted by marcy at 2:19 PM No comments: Links to this post 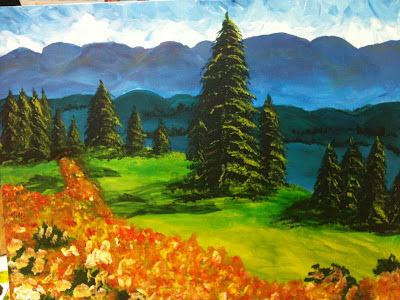 Here is my latest acrylic painting from last night.  I enjoyed the class, but I am not as happy with this one.  maybe it's all the warm colors in the front that aren't my favorites, but I sure enjoyed learning the techniques and mostly...mixing colors.

But here's the good news.  I was showing photos of my two paintings and someone offered to buy the rooster.  I was tickled and of course sold it.    Woot. Paid for my two classes and my dinner.  I am not going to quit my day job of glass artist, but that sure was a fun outcome from just a quick chat.
Posted by marcy at 2:47 PM 1 comment: Links to this post 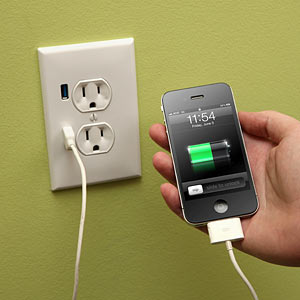 I found this wall socket that also has usb ports and I think I need to order one.  If you are like minded that there are never enough charging options, you can also get them.  Of course through Think Geek- right here.
Posted by marcy at 7:30 AM No comments: Links to this post

Back on The Ice 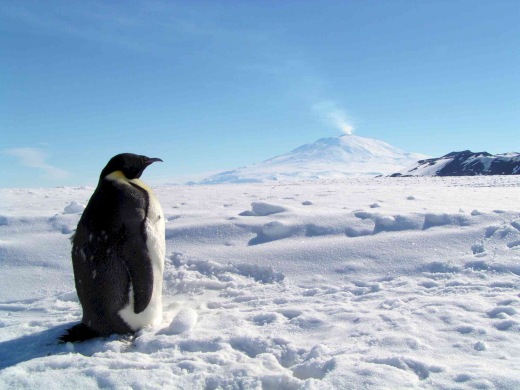 My daughter Sparky is back in Antarctica for another season.  No, that is not her photo above, but rather one that I found through google.  It kind of encompasses a little of the highlights...penguins, a live volcano, Erebus, and lots of snow and ice.

She will be working out of McMurdo again, but on a team that sets up the scientific base camps, who live mostly in tents while setting up the bases.  That sounds so cold.  And her stories are always ones that make me thankful to live in the opposite of that environment. 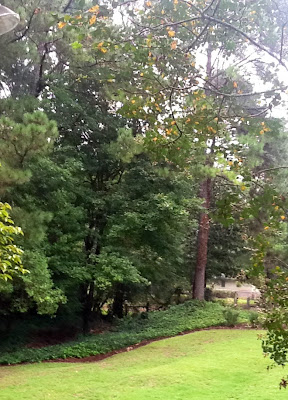 Exhibit A....This is the view out my back door.  Snow and ice or green and humid.  Some days I wish for the other, but just for a second or two.

Either way, I always miss her.  Wishing her another successful season far, far away.  And time to start packing up the care packages.  She always loves receiving them and letters.
Posted by marcy at 8:16 AM 3 comments: Links to this post 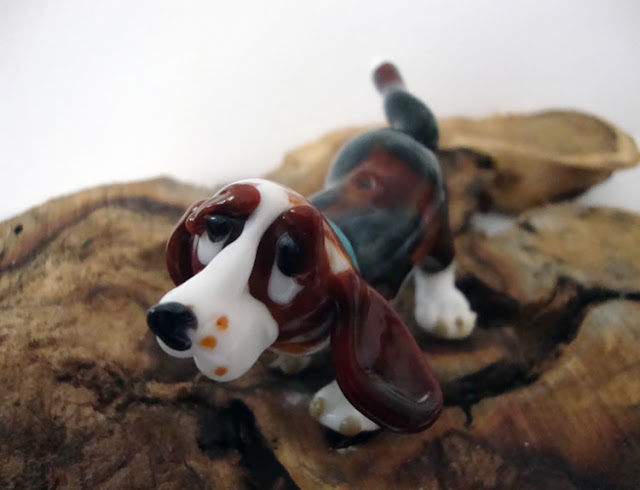 I am honored to be featured on Heidi's Aventurine Dream blog for her Gathering wrap up.  It was a lovely experience to be so involved this year.  I taught a sculptural pet class, presented to the membership (how to make a sculptural bassett hound as pictured above), was a co-presenter for the teaching the teachers class with Kristina Logan and Heather Trimlett and of course participated in some of the activities, like the juried show, 3x2 that Heidi mentions in her blog.  And that's not all..but sure is a enough to name for the moment.

Hope your week has started well- going to feel rather short- so good luck to getting it all done. I know I need it!  See you tomorrow.
Posted by marcy at 6:29 AM 2 comments: Links to this post

Currently in My Etsy Shop